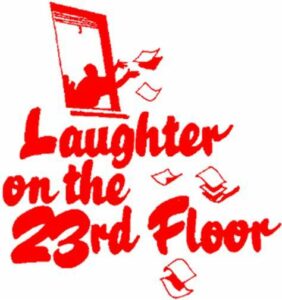 The play focuses on Sid Caesar-like Max Prince, the star of a weekly comedy-variety show circa 1953, and his staff, including Simon’s alter-ego Lucas Brickman, who maintains a running commentary on the writing, fighting, and wacky antics which take place in the writers’ room. Max has an ongoing battle with NBC executives, who fear his humor is too sophisticated for Middle America. The play is notable not only for its insider’s look at the personalities and processes of television comedy writing, but also for its reflection of the political and social undercurrents of its time, in particular the rise of Joseph McCarthy, relationships between various (European) American ethnicities, and attitudes toward women.