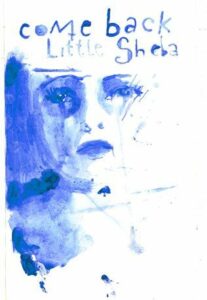 Set in the midwestern home of Doc and Lola Delaney, the story focuses on the despair of a middle-aged couple, and the regrets that haunt them.  Forced to marry due to an unwed pregnancy, Doc gave up a career in medicine and blames Lola.  Lola suffers the loss of hope, youth, and romance; her sadness is represented by the disappearance of their little dog, Sheba.
The couple’s quiet existence is disrupted by the arrival of Marie, a boarder in their house who pushes the boundaries of 1950s convention.  Marie enjoys the attention of two men, and even catches Doc’s eye.  Her youthful sexuality triggers long buried emotions in both Doc and Lola, and threatens the newfound sobriety of Doc, a recovering alcoholic.
William Inge’s groundbreaking drama helped pave the way for the realistic works we see today!